In the mid and late 1900s, exploration companies were actively looking for minerals in Clayoquot Sound, but it was commonly thought that the mineral deposits discovered were not likely to ever be developed.

Times have changed. Globally, many of the good ore deposits have been mined out, while the commodity prices of gold and copper are fluctuating near all-time highs. These factors have led mining companies from around the world to target low-grade deposits, such as are found in Clayoquot Sound.

Currently there are two potential mines of concern in the Clayoquot Sound UNESCO Biosphere Reserve: Catface copper and Fandora gold. In 2009 Imperial Metals, a Vancouver-based mining company, bought Selkirk Metals and the mining rights to both these mineral properties.

Fandora is a deactivated mine site located in Tranquil Valley in Tla-o-qui-aht First Nation traditional territory. Imperial Metals has an exploratory drilling permit to assess opening up a gold mine on the 44-square-kilometre tenure.

The Tla-o-qui-aht First Nations have developed a Tribal Parks management plan for the valley that outlines a sustainable development alternative to mining and are calling for a mining moratorium for all their territories. But inadequate consultation by government and industry has lead to a continued threat of mining at Fandora.

Catface Mountain (or Chitaapi in the Nuu-chah-nulth language) stands in Ahousaht First Nations territory, is a prominent landmark in the heart of Clayoquot Sound and contains low-grade copper-molybdenum ore. It is just 13 km away (and visible) from Tofino, and only 3 km away from the village of Ahousat.

Imperial Metals conducted test drilling in 2010 (and Selkirk in 2008), with permission from the Ahousaht band council, to explore the potential for an open-pit copper mine. Imperial has been quiet since then as to its plans for Catface, but is currently busy opening other contentious mines, such as the copper-gold Red Chris mine in the Tahltan Nation’s territory, in the Sacred Headwaters of northern British Columbia. Imperial is also dealing with the aftermath of the August 2014 spill of toxic tailings-pond sludge at its Mount Polley mine in central BC — the largest mine spill in Canadian history (25 million cubic metres).

There are many concerns about the negative ecological, social, and economic impacts of potential mining in Clayoquot Sound. The region is a UNESCO Biosphere Reserve that has largely escaped industrial development and still retains most of its globally rare ancient temperate rainforest.

Imperial Metals, the backer of the potential Catface Mountain (known as Chitaapi in Nuu-chah-nulth) mine, would remove the top of Catface by blasting 200 to 300 million tonnes of “overburden” from the mountain’s south peak. This “waste rock” would be dumped in enormous piles nearby, burying other parts of the mountain or valleys below. The removal would be visible and audible from Tofino, from nearby provincial parks, and especially from the native village of Ahousat, just 3 km away.

Then 300 million tonnes of ore (rock containing economic quantities of copper, molybdenum and gold) would be blasted out of the top third of the mountain. Only 0.4% of that ore is copper, so over 99% would wind up as toxic sludge that needs to be stored in a tailings pond somewhere in Clayoquot Sound — for centuries. 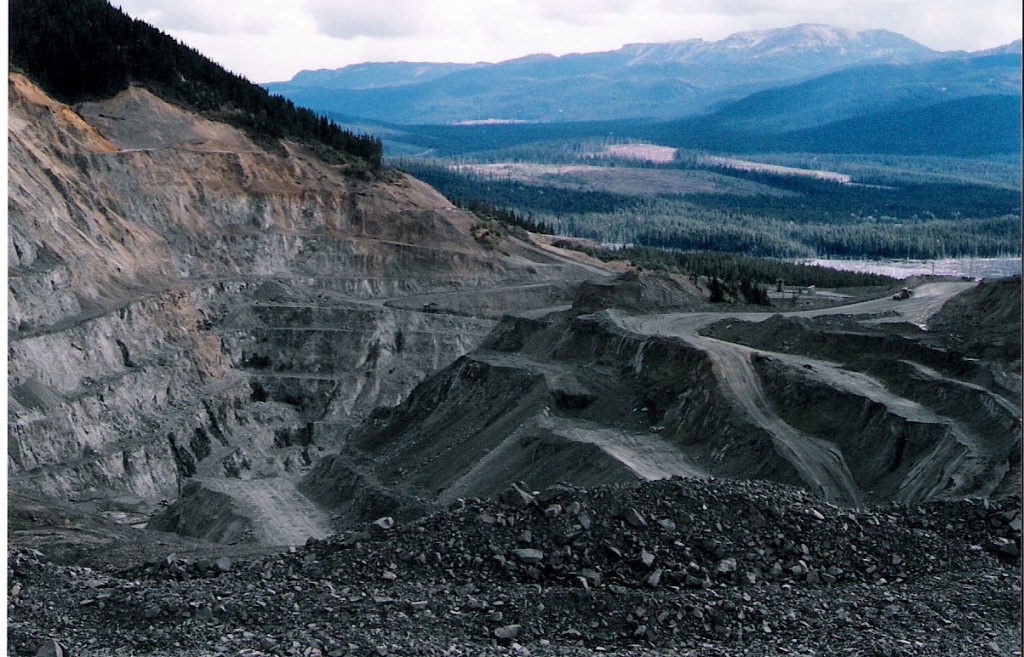 Imperial Metals’ Huckleberry copper mine in central BC, 2009

With 4 metres of rainfall every year, and the eventual certainty of major seismic activity (earthquakes), the tailings pond could overflow or burst and inundate nearby Cypre River, which hosts all 5 Pacific salmon species. In August 2014, at Imperial Metals’ Mount Polley mine in interior BC (which gets much less rain than the coast), the dam that encircled the tailings pond burst, sending 25 million cubic metres of toxic effluent into nearly rivers and lakes.

Copper is toxic to marine organisms, especially to algae which are the primary producers at the bottom of the food chain. Copper inhibits salmon’s ability to “smell” their way back to their home stream. The ocean and shorelines below Catface Mountain support rich aquatic life including clam beds, eelgrass, herring spawning beds, 3 rockfish conservation areas, and important grey whale feeding areas.

Imperial’s potential Fandora mine, in southern Clayoquot Sound, could open the area to more gold mines and major industrialization, as the gold vein appears to extend both east and west of the old shaft mine, indicating a prospective area of gold mineralization in excess of 2,500 hectares.

Any mines in Clayoquot Sound would export raw materials. The profits would flow to outside interests, with the only benefits locally being a few jobs. Mines open and close regularly, as the economy booms and busts, so the mining workforce is highly mobile. When a new mine opens, a highly-trained workforce is usually available to migrate in and take all the good jobs, leaving locals to do mostly menial tasks. The sudden influx of money, along with income inequity, brings a host of social problems, and the influx of drugs into mining areas is well documented.

When the ore is mined out in a few decades, the jobs are gone, but a toxic legacy of acid mine drainage and metal leaching is likely to remain.

To learn more about the human health impacts of mining, check out some of the fact sheets below.

The Clayoquot Sound UNESCO World Biosphere Reserve should be no place for mining!

Biosphere Reserves are established to conserve areas of global ecological importance and to promote sustainable development. Clayoquot’s ecosystems are too rare and precious to deface and contaminate by mining, which is clearly not a sustainable activity – once a deposit is mined out, it’s gone.

Overlooking the mouth of Tranquil River. A few km upstream is the old
Fandora gold mine that Imperial Metals is interested in re-opening.

Unfortunately, mining is not prohibited in Biosphere Reserves. To make Clayoquot Sound permanently mine-free will require action by the provincial government.

Tla-o-qui-aht First Nations are calling on the BC government to establish a mining moratorium in their traditional territories, which encompass the southern third of Clayoquot Sound.

A moratorium on all mining activity, including exploration and staking of new claims, is a good first step towards designating Clayoquot Sound mine-free.

Here you will find the FOCS Winter 2021 – 2022 Newsletter to explore the major issues in Clayoquot Sound and beyond as well as getting a glimpse of the work we have been doing over the last several months, including updates on our campaigns.

Last summer as Prime Minister Justin Trudeau took a taxpayer-funded luxury vacation in Tofino, the deadline for the Government of Canada to charge Imperial Metals for the 2014 Mount Polley Mine disaster passed. With no charges, fines or penalties, a signal was sent...

The summer 2020 edition of our twice-yearly newsletter is out, with articles including: #INDIGENOUSLIVESMATTER: Anti-Racism Movement Confronts Generations of Colonial Violence B.C. Fails Test of Indigenous Rights Law: Pipelines Pitted Against Indigenous Title...