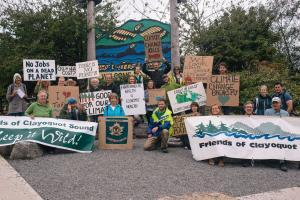 Rally participants gather for a photo and to call MP James Lunney to let him know they want Climate Action.

Tofino – On Sunday the 21st of September west coast residents, lead by Friends of Clayoquot Sound, took part in an international call for climate action. There were hundreds of actions across Canada from St. Johns Newfoundland all the way to Tofino; showing that coast to coast addressing human driven climate change is something Canadians care deeply about. Read about the possible impacts of Climate Change on Clayoquot Sound.

Globally citizens are frustrated at how little climate action there has been. Scientific predictions for the earths climate have gone from dire to desperate, but there is still time for action. Realistically if we want to prevent runaway climate change we need to start curbing carbon emissions in the next two years.

“Globally the Avaaz clean energy petition has reached over 2 million signatures! The petition calls for “100% clean energy by 2050”. Not only is this number necessary for preservation of our quality of life, IT IS technologically and economically FEASIBLE all we need is the political will to take climate action.” Said Emery Hartley, Friends of Clayoquot Sound Campaigner

The Friends of Clayoquot Sound used the march to release a short handbill on the most pressing impacts of climate change on Clayoquot Sound, including the predicted impacts on wild salmon, the ancient temperate rainforests and Esowista peninsula’s renowned beaches.

For British Columbians there are three simple important actions to take to combat climate change at a societal level. Help groups like the friends in their forest campaigns, our old-growth temperate rain-forests sequester more carbon than almost any other terrestrial ecosystem. Secondly join the province wide no tankers campaign and help prevent BC from becoming a climate-changing corridor. Lastly, our elected officials need to know we care; we need to engage our democracy and put it to work to cool the climate.

Emery Hartley is the FOCS campaigner. For comments, questions or to get involved contact him at emery @ focs.ca