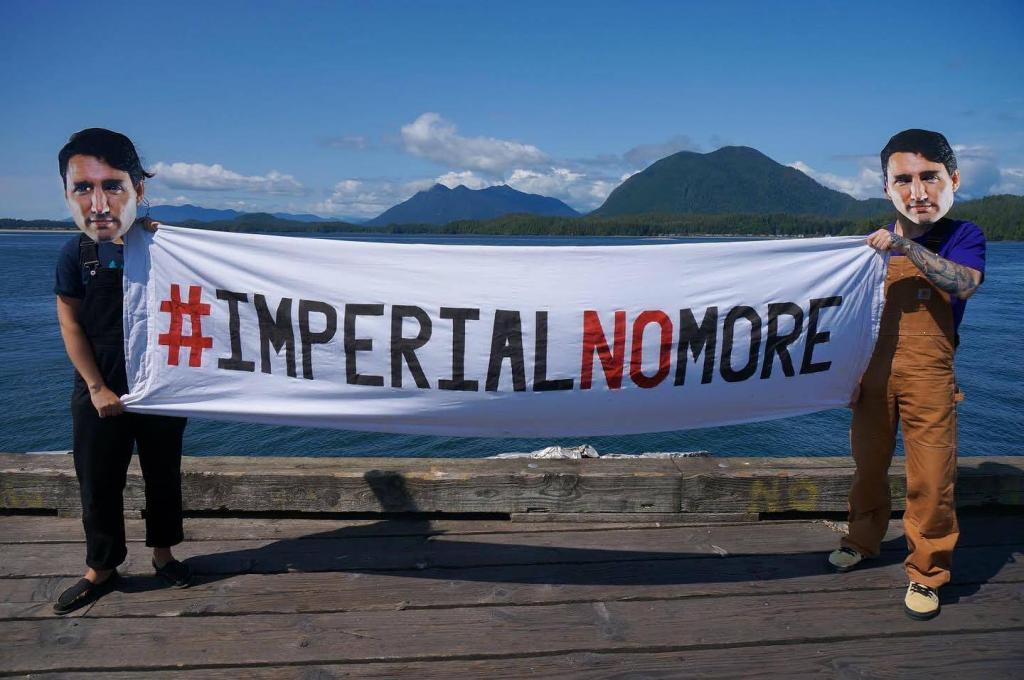 FOCS activists send a message to Prime Minister Justin Trudeau to charge Imperial Metals, the corporation that wants to mine Catface Mountain in Clayoquot Sound and is responsible for the ongoing Mount Polley Mine disaster. Photo by German Ocampo

Last summer as Prime Minister Justin Trudeau took a taxpayer-funded luxury vacation in Tofino, the deadline for the Government of Canada to charge Imperial Metals for the 2014 Mount Polley Mine disaster passed. With no charges, fines or penalties, a signal was sent from government to Imperial Metals, the mining industry, and the stock market that the environmental costs of mining will be subsidized by the public, meaning greater profits can be privatized.

Two days after the deadline passed, Geoscience BC contracted a helicopter team to survey 27,000 kilometres of fly lines around northern Vancouver Island. The project, initiated without the consent of any Nuu-chah-nulth First Nations, resulted in 34 new mining claims. Meanwhile, Imperial Metals has been busy applying to the B.C. Government to probe the Skagit Headwaters for copper and gold.

While in Clayoquot, Imperial Metals holds the mining rights to assess the development of a gold mine, called the Fandora project, within the unceded territory of Tla-o-qui-aht First Nations, as well as an open-pit copper mine on Catface Mountain in Ahousaht First Nation’s unceded territory. Both Nations are adamant that mining will not be allowed in their territories.

Over the winter, B.C.’s Chief Inspector of Mines released a report revealing that taxpayers are on the hook for more than $1.2 billion in clean-up costs for the mining industry. This includes the ongoing clean up of the 25 billion litres of toxic mining waste released into the Fraser River watershed by Imperial Metals Mount Polley Mine disaster. The disaster occurred within the territory of the Secwepemc First Nation, home to one of the largest salmon spawning grounds in the world.