Home » Understanding Systemic Racism through the History of Policing in Canada

Understanding Systemic Racism through the History of Policing in Canada 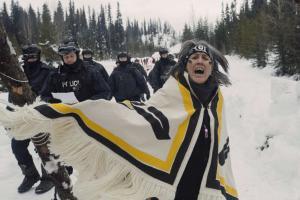 The RCMP’s tactical invasion of Unist’ot’en Camp in 2020 forcibly removed Wet’suwet’en people in ceremony outside their Healing Centre to make way for the Coastal GasLink pipeline. One of the latest examples showing how little has changed. Photo by Wet’suwet’en Checkpoint @wetsuweten_checkpoint

Canada’s first prime minister, John A. Macdonald, created what is known today as the Royal Canadian Mounted Police (RCMP). His model was the Royal Irish Constabulary, a paramilitary force the British created to keep the Irish under control. Police in Canada were established to serve the interests of colonial expansion and colonial rule.

“The RCMP is a racist institution. What we’re seeing aren’t decisions from a random, bad apple. This is decision making within the institution, tracing back hundreds of years…” – Elizabeth May

Historically, the RCMP acted as the enforcement arm of for the Government of Canada’s relationship to Indigenous people responsible for:

The RCMP’s history is fraught with military-style campaigns against Indigenous people protecting their homeland. Some of these police operations which used lethal force took place at Red River, Batoche, Cut Knife, Oka, Gustafsen Lake, and Ipperwash. In 2020, even when there is still no consent from entire Indigenous Nations, the RCMP intervene in land conflicts on behalf of corporations profiteering from extraction of what the market deems capital — trees, fish, oil, gas, and minerals.