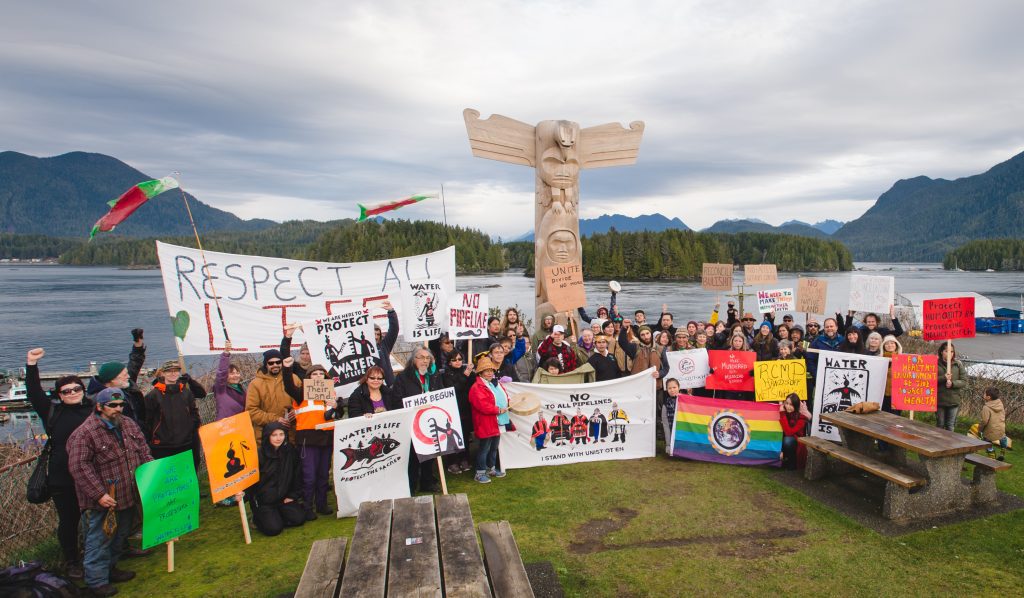 Last winter in Tofino, Tla-o-qui-aht First Nation led a march and rally in solidarity with the Wet’suwet’en Nation in saying “No To All Pipelines”. – Photo by Marnie Recker

During the Government of Canada’s recent election, Justin Trudeau campaigned on a promise of more significant action to fight climate change. He even marched with the Global Climate Strike mobilization in Montreal.

Yet Trudeau is still planning to invest billions of taxpayer dollars in the Trans Mountain tar sands pipeline expansion without the consent of Indigenous Nations, the B.C. Government, and municipalities like Vancouver, Victoria, Burnaby, and Tofino. The proposed pipeline would result in Canada not meeting global climate commitments. Tanker traffic past Vancouver Island would increase 700% to transport tar sands oil to Asia to supply the world’s fastest growing single use plastic market, increasing an already alarming epidemic of marine debris across the globe.

This is why a group of youth from all around Canada are suing the federal government for failing to adequately take action on the climate emergency, putting future generations at risk. The 15 youth, who range in age from 11 to 18, are correct. The Canadian Government’s contribution to high levels of climate changing emissions violate their rights to life, liberty and security of the person under Section 7 of Canada’s own Charter of Rights and Freedom. The youth are also charging the Government of Canada under Section 15 of the Charter with violating their right to equality, as the effects of the climate emergency disproportionately affect the youngest generations most.