More than 30 fish farms owned by Cermaq or Marine Harvest operate in Musgamagw Dzawada’enuxw territory within the in the Broughton Archipelago. The Musgamagw Dzawada’enuxw, ‘Namgis and Mamalilkala First Nations have never given their consent to open-pen Atlantic salmon feedlots operating in their territory and are now demanding that the provincial government to respect their traditional fishery and have the fish farms removed.

In late August, First Nations leaders from the ‘Namgis, Mamalilikala, and Musgamagw Dzawada’enuxw began occupations at two Norwegian-owned Marine Harvest fish farms in the Broughton Archipelago on Swanson and Midsummer Islands within their traditional territories. The occupations were established by deploying tents and quickly building weather-resistant tiny houses on the fish farms.

Locally in early September, members of the Tla-o-qui-aht First Nation symbolically paddled cedar canoes around fish farms in their territory to send a message in solidarity with the occupations. Following that, Skookum Lennie John, of the Ahousaht Nation’s Yaakswiis Warriors, and Friends of Clayoquot Sound Campaigner, Jeh Custerra, responded to the call for solidarity from the occupations.
At Swanson Island, Chief Alfred invited supporters on land in the bay about 200 metres from the Swanson fish farm is a recently abandoned worker camp. At a gathering of around 100 people, he and other Chiefs of the ‘Namgis and the neighbouring Nations shared passionate words as they reclaimed the worker camp as a remote base to exercise their sovereignty and jurisdiction to monitor the fish farms and patrol their waters. Lennie John spoke about his experience evicting a Cermaq fish farm in Ahousaht waters.

“Imagine if all Nations came together to protect the salmon,” reflected Skookum Lennie John.

Upon returning to the Mid Summer occupation, Custerra helped to strategize a solidarity campaign based on the request from the Mid Summer and Swanson occupations for solidarity actions to remove fish farms from their territory. Considering that BC’s NDP government can revoke the “occupation permits” for the fish farms if deemed not to be in the public interest, the constituency offices of BC Government’s Cabinet Ministers of the New Democratic Party became the target. Custerra developed an Action “How To” Guide for Cleansing Our Waters Solidarity Occupations and started reaching out to activist networks across BC. 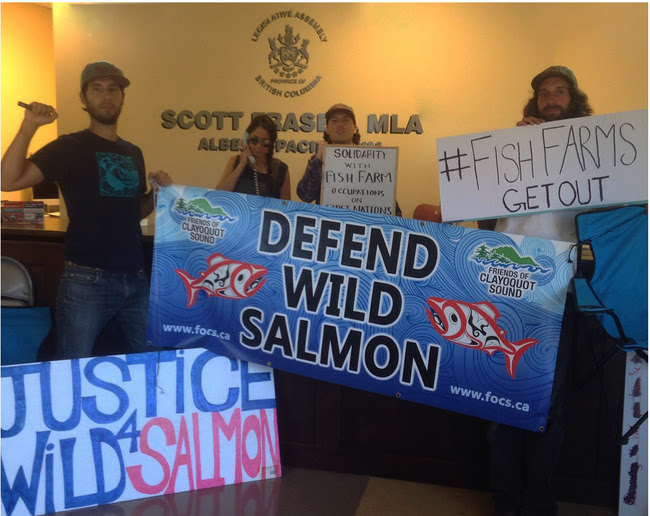 Four days after the Action Guide was distributed, a solidarity action targeted BC Attorney General, David Eby, with a day long occupation of his constituency office in Vancouver. Two weeks later there were coordinated solidarity actions. In Victoria, solidarity group, Fish Farms Out Now, occupied the office of Minister of Agriculture Lana Popham. While in Port Alberni, Friends of Clayoquot Sound, led an occupation of the office of the Minister of Indigenous Relations and Reconciliation, Scott Fraser, with support from members of the Tla-o-qui-aht and Ahousaht Nations. The BC Government Ministers indicated a meeting with the First Nations would happen within weeks. 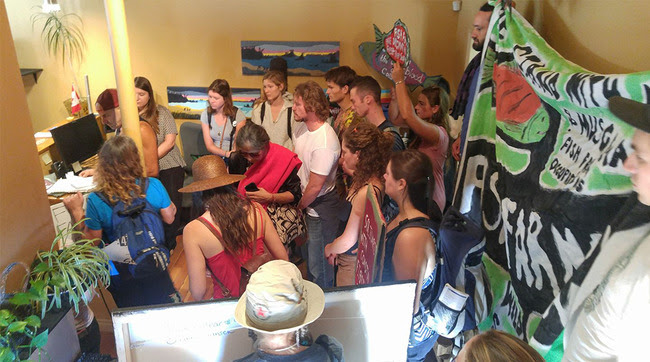 Solidarity groups responded on October 13th. Friends of Clayoquot Sound supported an occupation of the constituency offices of Environment Minister George Heyman in Vancouver, and reached out to the Wild Salmon Defenders Alliance to target Tourism, Arts, and Culture Minister Lisa Beare. Near Victoria, Fish Farms Out Now rallied outside Premier Horgan’s office which closed because of the action.

Now we call on our supporters to prepare for a solidarity rally which will bring frontline occupiers to the BC Legislature in Victoria on Thursday, November 2nd. The rally will begin at 11am, so bring your family, friends, drums, and signs of support!

First Nations are enforcing their sovereignty and jurisdiction by telling the governments of BC and Canada to revoke the illegal and invalid permits for these uninvited fish farms which do not have First Nations consent.