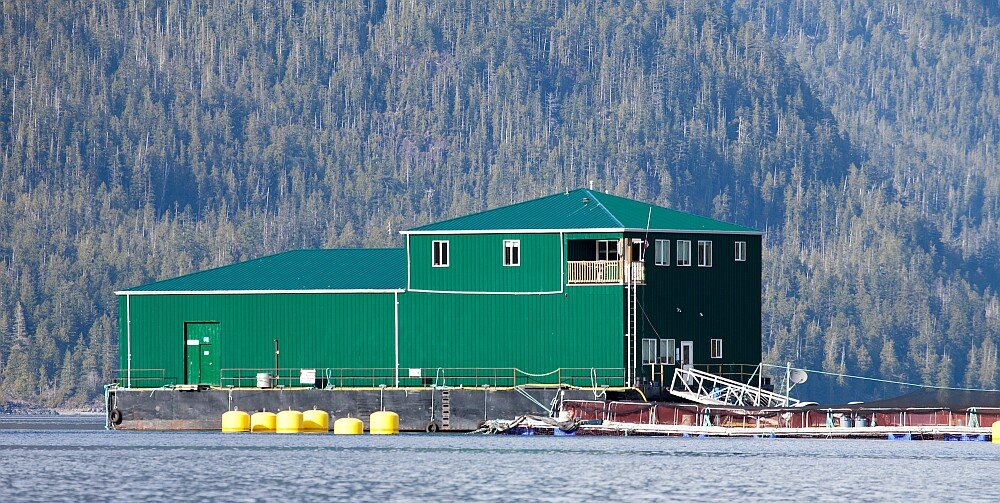 The feedlot was approved last fall, although it is opposed by Tla-o-qui-aht First Nation, who declared Meares Island a Tribal Park in 1984, by Tofino municipal council and Chamber of Commerce, and by numerous environmental groups and citizens. Plover Point was the only site exempted from the moratorium on salmon farm expansion in BC while the Cohen Commission (2009-2012) examined the decline of Fraser River wild sockeye salmon.

Mainstream has proudly announced that 2 of the 12 cages are made of copper alloy, as part of a 2-year comparative trial between the new copper mesh and the usual nylon nets.

“Tinkering with open net-cages misses the point,” stated Eileen Floody, a director of Friends of Clayoquot Sound. “What’s needed is to get salmon feedlots out of the ocean and into closed containment tanks on land. For example, the Namgis First Nation has just opened a land-based salmon farm on the east coast of Vancouver Island near Port McNeill.”

The disease and parasite risks that open net-cage salmon farms pose to wild salmon, and their other detrimental effects on the ocean environment are well known in BC and globally and have prompted numerous inquiries, legislative committees and moratoria. Wild salmon are in decline everywhere that open net-cage salmon farms operate around the world (Ford and Myers 2008).

In Clayoquot Sound, where there are 21 feedlot sites, wild salmon are in serious decline despite having relatively pristine freshwater spawning habitat. Meanwhile, parasites such as sea lice and diseases such as IHN (Infectious Hematopoietic Necrosis) are being documented at salmon feedlots in the Sound.

“Friends of Clayoquot Sound continues to educate the public about the harmful effects of open net-cage salmon farming. We advise consumers not to buy salmon farmed in net-cages and to make wiser food choices instead,” said Floody.