On the third anniversary of the Mount Polley mine disaster, and deadline for Provincial charges, August 4, 2017, Indigenous advocate Bev Sellars filed a private prosecution against Imperial Metals Mount Polley Mining Corporation at the Provincial Court of British Columbia in Vancouver. Sellars was Chief of Xat’sull First Nation when the disaster struck near her community 3 years earlier and needs funds to support her legal case.

“If we allow this disaster to go unchecked, it will be a free for all for resource extraction and the environment and all of us will pay the price. I could not bear to witness BC simply stepping aside and giving up on its responsibility to protect our shared environment and waters,” stated Bev Sellars. “In my culture, we have a sacred responsibility not only to care for the land, waters, animals, and people living today, but also for the next seven generations to come.”

The legal action came after B.C.’s newly formed NDP-Green government announced it would not file charges before the August 4 deadline, stating that “an investigation was still ongoing.” This also presses the Trudeau government to enforce the federal Fisheries Act in the matter.

Sellars filed charges under 15 counts: 10 under the B.C. Environmental Management Act and 5 under the B.C. Mines Act. The main charges relate to the dumping of contaminated mining waste into the environment and surrounding waterways, and to poor and unsafe operational practices, allegedly in violation of multiple permit conditions and general provisions of both Acts and associated regulations. Sellars, a grandmother of 3, believes her action could be a test for B.C. laws.

“If B.C. laws cannot be enforced when such a massive mining spill occurs, then we have a serious problem in B.C. and we must act to fix these laws. Justice ultimately would be to make sure that nothing like this happens again. A message has to be sent to both governments and resource extraction companies that the industry has to be cleaned up. Profit is not the only goal, the environment and the people who depend on it have to be factored in.” 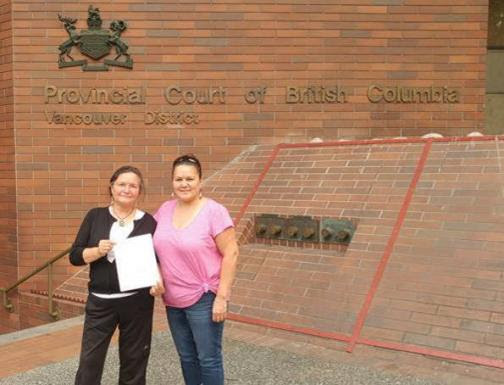 A private prosecution is an enormous amount of work, and this one is funded in part by West Coast Environmental Law’s Environmental Dispute Resolution Fund, but one of the conditions of their support is that the case be at least 30% funded by public donations.

Bev Sellars explained her case this way, “With the federal and provincial governments neglecting to enforce environmental protection laws, I’m stepping up and fundraising for our legal team to be ready to go to trial in 2018, please give us your support. Thank you.”