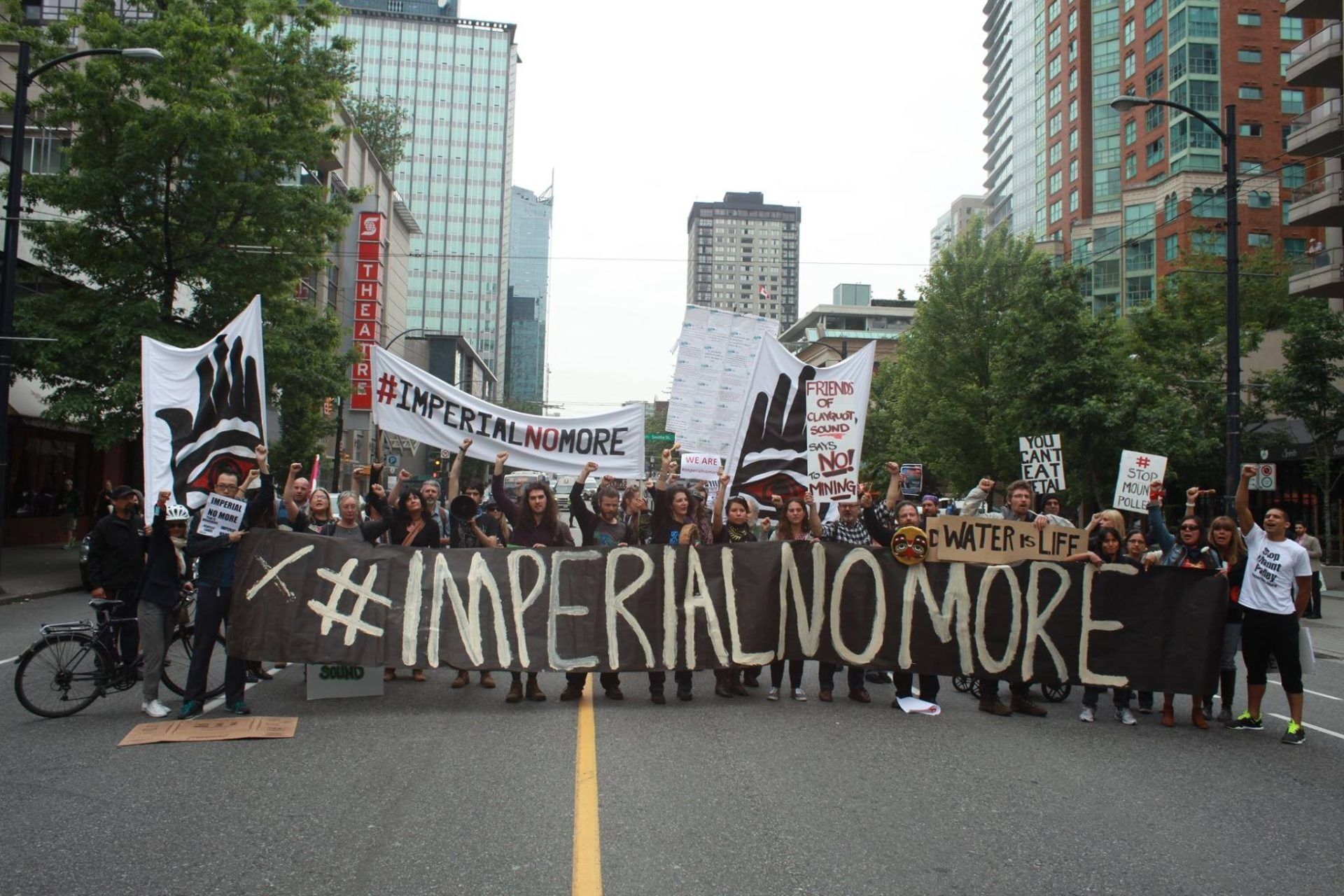 Friends of Clayoquot Sound has organized in solidarity with Indigenous land defenders from the Secwepemc, Tla-o-qui-aht, and Ahousaht Nations to disrupt the Imperial Metals Annual General Meetings and to hold executives and shareholders accountable. #IMPERIALNOMORE #MOUNTPOLLEY #WATERISLIFE

Within Clayoquot Sound, Imperial Metals has pursued the development of a gold mine, called the Fandora project, within the unceded territory of Tla-o-qui-aht First Nations, as well as an open-pit copper mine on Catface Mountain in Ahousaht First Nation’s unceded territory. Both Nations have been adamant that mining will not be allowed in their territories.

This summer, Friends of Clayoquot Sound became aware that Imperial Metals, under the name Selkirk, expressed a renewed interest in Clayoquot Sound by seeking a Notice of Work Permit to conduct exploratory work in the Tla-o-qui-aht Tranquil Tribal Park. The Tranquil area hosts dozens of threatened and endangered species, some of the last high-carbon, high-biodiverse forests on Vancouver Island and supports a rich marine ecosystem. Developing a mine there would cause significant ecological damage and would negatively impact alternative economic opportunities for the Tla-o-qui-aht Nation and the region.

This is especially troubling as the current B.C. mining regime is permitting the ongoing pollution of watersheds and ecosystems. An internal audit conducted within the Ministry of Energy, Mines and Low Carbon Innovation found that inadequate record-keeping and vaguely worded regulations for tailings storage facilities represent significant challenges for regulation compliance and enforcement. The Mount Polley mine tailings pond disaster that spilled 25 billion liters of toxic tailings into Fraser River watershed in the unceded territory of the Secwepemc Nation serves as an example of this broken regulatory system. Only now, seven years after the disaster, two engineers have been found in breach of their professional codes of conduct as they did not provide sufficient observation and monitoring of the tailings dam. Yet no executives or top managers at Imperial Metals have been held formally responsible.

Since the incident in 2014, the Mount Polley Mine has continued to dump wastewater into Hazeltine Creek and Quesnel Lake – a source of drinking water and significant spawning grounds for sockeye salmon – while also missing several deadlines to comply with the terms of its wastewater permit. This is a troubling example of the weak environmental oversight in the Canadian mining industry which has renewed the call for mining law reform. The overall insignificance of enforcement measures against Imperial Metals for the Mount Polley disaster sent a signal to the mining industry that current laws and regulations can be disregarded. With no charges, fines or penalties directed towards the corporation, Imperial Metals increases its potential to expand unsustainable mining operations in B.C.

Imperial Metals shareholders and executives have been held accountable at their Annual General Meeting by Friends of Clayoquot Sound in solidarity with Indigenous land protectors from the Secwepemc, Tla-o-qui-aht, and Ahousaht Nations. The Indigenous land defenders and water protectors have warned the Imperial Metals investors they should be aware of the serious financial risks in investing in poorly run companies like Imperial Metals. Since 2014, Imperial Metals’ share price has dropped from $18 to $3.38 at present. After bottoming out at $1.27 in 2018, the current price is being artificially inflated by Imperial Metals claiming a mining interest in Clayoquot Sound when mining is banned by the Ahousaht and Tla-o-qui-aht Nations.