Cermaq Canada announced the death of 25,750 kg (over 55,000 pounds) of farmed Atlantic salmon at the company’s Mussel Rock farm, off the north corner of Meares Island. The fish died within a 24-hour period last week, leading to a frantic effort to suck the bodies from the net-pens before their dead weight compromised the site’s flotation. 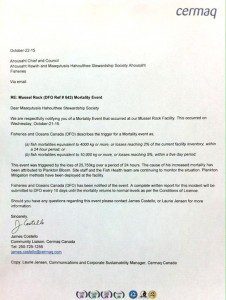 First public news of the die-off came from a letter (right) the company sent to Ahousaht council and Hawiih (hereditary chiefs), in whose territory the fish farm lies.

FOCS contacted the company, which was reluctant to provide details. They did say the cause is an “algae bloom,” which is now “under control” by encircling the pens with enormous tarps to keep the algae out — standard procedure. They would not comment on the cause of bloom, which might include warm water and/or nutrient loading from the farm itself. Blooms typically occur in summer, when sunlight and water temperature are seasonally high.

As the map above shows, Mussel Rock (centre) is in close proximity to several other Cermaq fish farms. The company says they are not testing the fish for disease because the fish “aren’t sick,” they just have algae in their gills, suffocating them.

The 25 tonnes of dead fish have gone to a composting facility.

This incident illustrates how precarious it is, for both the industry and the environment, to farm salmon in open net-pens in the ocean. Closed containment on land is a far better option that salmon farming should be actively shifting to.
Share this: