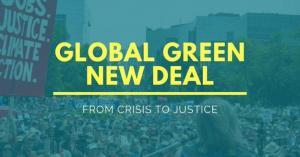 Authors Arundhati Roy and Naomi Klein took part in a virtual conversation to help launch a Global Green New Deal project to foster internationalism and visualize possibilities for a new and better world for people and the planet.

“The violence of a capitalist system is rooted in an extractivist logic that treats the Earth itself, individual places, and entire groups of people as disposable — a logic of endless extraction… that really cherishes nothing and no one,” said Klein.

Before the virus struck, the effect of climate catastrophe and obscene inequality meant that millions were already living in multiple crises. Now, as the pandemic wreaks an untold impact, we know that it is those who are most vulnerable—whether from their inability to access healthcare, or because of their economic precarity—who bear the heaviest burden.

Our only recourse is to amplify the calls for justice ringing from every corner of the globe. The time to build the future we deserve is now, and international solidarity is the tool we need to begin its construction. A Global Green New Deal for People and Planet can help us move from crisis to justice.