First published on the Westerly news on November 25th, 2015

The 21st United Nations’ Climate Summit (COP 21) begins in Paris next week marking the continuing effort of nations around the world to finally make a substantial agreement to address the climate crisis. Last week, the U.N. released their latest climate report confirming the need for massive globally cooperation to overhaul energy supply chains and reform farming and forest management. The good news is about 150 countries, out of about 196 total, have submitted action plans to reduce carbon emissions. For a new climate treaty to be ambitious it must include science-based targets, real money, and a strong framework to carry action forward.

The climate justice message is clear: keep fossil fuels in the ground and finance a just transition to 100% renewable energy by 2050. To do this, we need to stop as many new fossil fuel projects as possible, and phase out existing ones, so that we can keep coal, oil and gas in the ground. Second, we need to weaken the political and financial power of the fossil fuel industry — this is where fossil fuel divestment comes in. We need to stop giving money to the polluters and start giving power back to the people. Third, we need to show the world that solutions are underway and that a push to 100% renewable energy, as well as more regenerative farming and forestry practices, that will help combat poverty and unemployment while minimizing pollution. Fourth, we need to show that there is a massive public demand for action, mobilizing around the world at an unprecedented scale.

Closer to home, there have been some hopeful examples of this kind of leadership from governments. In the United States, in response the climate justice movement’s advocacy, President Obama recently rejected the Keystone XL pipeline which proposed to ship about 1 million barrels of tar sands oil each day from Alberta to the Gulf of Mexico. While in Canada, the newly elected Prime Minister Trudeau ordered a ban on oil tankers for Dixon Entrance, Hecate Strait & Queen Charlotte Sound. This effectively rejects the controversial Northern Gateway pipeline proposal as oil tankers are now not permitted to operate on the northern coast of BC. Stopping these two pipelines prevents a near doubling of carbon intensive tar sands production.

In Clayoquot Sound, there have also been some real victories in the past months. Leadership from both the Hesquiaht Nation and the Ahousaht Nation have announced bans on industrial logging in their territories. These moratoriums, protecting the forests, are hugely significant for ecosystem health and climate action. Deforestation is one of the largest contributors to climate destabilization globally, while old growth forests are amongst the richest stores of carbon on Earth. 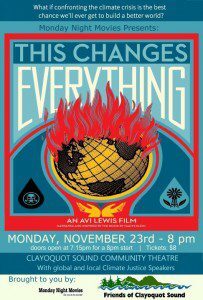 This Changes Everything Film

Climate action from around the world was on display at the last Monday Night Movies in Tofinp feature “This Changes Everything”. The documentary is based on Naomi Klein’s latest book of the same title which examines how capitalism is giving rise to climate chaos. Klein argues that the real inconvenient truth for climate action is that the current economic system, of infinite growth and externalities, cannot be reconciled with the ecological balance of carbon necessitated by natural law. The film illustrates that our climate justice moment will not only be defined by what happens between governments in the negotiating halls, but also through actions organized by grassroots people around the world.

If enough people agree that it’s time for the world to move in a new direction, and push together, the world will begin to move. The factors influencing climate change can often best be addressed at the local, community level. This understanding is what inspired Friends of Clayoquot Sound to organize the Clayoquot Sound Global Climate March.

— Jeh Custerra and Robert Zurowski, on behalf of Friends of Clayoquot Sound and the Global Climate March.