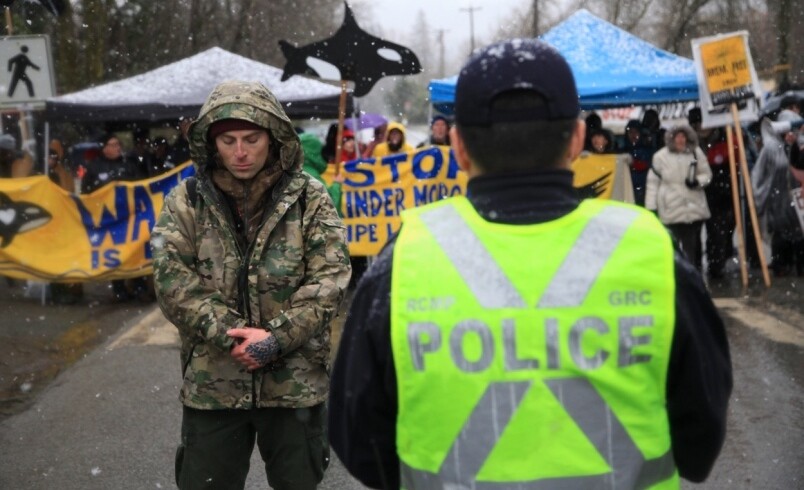 At the gates of Kinder Morgan’s oil tank farm in Burnaby unceded Coast Salish territories. Friends of Clayoquot Sound oppose the construction of fossil fuel pipelines as humanity is only at the beginning of the climate emergency threatening all life on Earth. Photo by FOCS.

In November, the Government of Canada’s Environment and Climate Change Minister Jonathan Wilkinson tabled Bill C-12 — a new legislation that would force current and future federal governments to set binding climate targets to get Canada to net-zero carbon emissions by 2050. In addition to public participation and assessment, the bill would require the Minister of Finance to prepare an annual report about key measures taken to manage the Government’s financial risks and opportunities related to climate change.

Just two weeks following this announcement, the Canada Energy Regulator reported that the Government owned Trans Mountain (TMX) tar sands pipeline, and the Government approved Keystone XL tar sands pipeline, would be unnecessary liabilities if climate emissions reduction are required in Canada. Tar sands oil is amongst the most carbon intensive oil on Earth. Despite initially being told the investment would be a $2 billion loan, taxpayers will now be paying $17 billion to own the TMX pipeline. Taxpayers cannot afford for the Government of Canada to subsidize Big Oil profiteering for a doomed industry at the expense of our collective future.