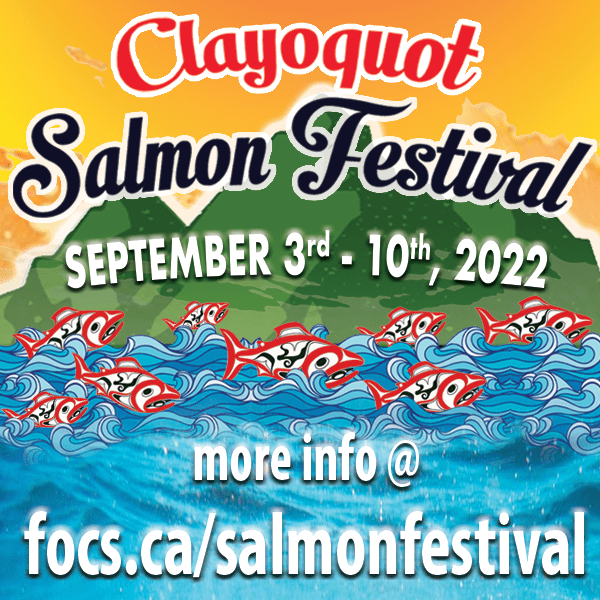 Salmon play an integral role for coastal livelihoods, cultures, and ecosystems in Clayoquot Sound. And they lead incredible lives, starting in freshwater then migrating to the ocean. Salmon stay at sea for years before their homing instincts guide them back, to the freshwater systems they were conceived in, to reproduce. Celebrating this magnificent species is what inspires Friends of Clayoquot Sound to organize the annual Clayoquot Salmon Festival!

From September 3 – September 10 there will be a variety of events, with something for everyone. The Clayoquot Salmon Festival is timed to coincide with the return of the salmon for spawning on the west coast. Anyone who has witnessed salmon hurling themselves upriver and over obstacles during the spawn knows their tenacious and inspiring drive to give life to the next generation.

The Festival always prioritizes celebrating the salmon return together as a community with creative spirit. So to kick-off Clayoquot Salmon Festival, we have a doubleheader launch party featuring live music of Victoria based funkmasters, Downtown Mischief at Lil Ronnies on Saturday, September 2 and Sunday, September 3. The music flows into the following weekend with the Upstream Shakedown: End of Summer Concert Under the Stars at the Village Green – in collaboration with Clayoquot Sound Theatre – featuring west coast funking, jazzing, rhyming supergroup, Viperteeth and the Initial Universe Crew on September 10.

Clayoquot Salmon Festival aims to offer residents and visitors an opportunity to reflect upon, and build an active appreciation for, the irreplaceable value of salmon in Clayoquot Sound. Salmon are essential to protecting a way of life rooted in the Pacific northwest environment, which is why salmon protection is a central theme for the Festival. Come participate, and learn about ocean protection with Surfrider Pacific Rim and Friends of Clayoquot Sound at the Love Your Beach Clean at Mackenzie Beach on September 5. You can also contribute to the restoration of Tofino’s First Street Rain Garden with Redd Fish Restoration on September 7.

At least 137 different species depend on the marine-rich nutrients that wild salmon provide. As a keystone species, salmon support coastal life including orcas, bears, wolves, and eagles while providing nutrients to the ancient rainforests of Pacific Northwest. But salmon are also under significant stress in the environment from climate change and water pollutants from industry. Learn more about community based monitoring and Canada’s first ever marine risk assessment for wild salmon with Cedar Coast Field Station and Friends of Clayoquot Sound at the Salmon Monitoring Demonstration and Discussion on September 6.

Indigenous Nations continue to lead society in upholding a vibrant, life-sustaining relationship with salmon. Throughout Clayoquot Sound, the remaining intact salmon watersheds are composed of free-flowing rivers and dense forests. The forests shelter clean drinking water locally and absorb global carbon emissions, helping to guard against the most severe impacts of climate change to us humans, salmon, and all life. The ancient salmon-forest ecosystems of Clayoquot Sound and across the west coast need to be protected.

On September 6, come to Voices For Salmon: Music, Films, and Stories to learn about salmon, their interconnected role in a healthy ecosystem, and what they mean to us, while hearing from Tla-o-qui-aht Tribal Parks, Friends of Clayoquot Sound, and other advocates — including the innovative music of Haida loop-poet, Ms. PAN!K. Collectively, we’ll share important perspectives on salmon protection and solidarity.