The 35th anniversary of the Meares Island Tribal Park Declaration of 1984 was celebrated over the Easter long weekend.
Chief Moses Martin, elected Chief of Tla-o-qui-aht First Nation, was also the elected chief 35 years ago. In April 1984, he declared Meares Island in Clayoquot Sound near Tofino a “Tribal Park” during a blockade to stop Canadian forestry company MacMillan Bloedel from logging the area’s ancient forests.
“35 years ago. It seems like yesterday. I remember so vividly that day we all stood up and said, ‘No,’” Martin told the audience at a community potluck event hosted by the Tin Wis in Tofino.
“We need to continue to do that,” he said. “We need to support each other in trying to protect this beautiful place that we call home.” As a result of the Tribal Park Declaration of 1984, the old-growth forest that exists on Meares Island remains standing to this day and protected for future generations.
Michael Mullin, long time resident of Tofino and Friends of Clayoquot Sound Founder and Board Member, gave a speech during Friday’s celebration. Mullin took part in the anti-logging protests and was there for the birth of the historical Tribal Park Declaration.
“This Tribal Park vision should be a model for the entire region. With climate change upon us, the worst thing we can be doing is be cutting down forests,” said Mullin. “It has become very clear that enlightened
Indigenous stewardship and control of the land, is always the best hope for the future. People who know who they are, know where they live, know where their ancestors come from, are always going to be better for their region than people who either invade or extract resources for profit.”
Tla-o-qui-aht First Nations’ Natural Resources Manager, Saya Masso, told the crowd that Tribal Parks is a vision for Tla-o-qui-aht territory, which includes creating space for old growth, salmon restoration, and cultural gathering areas. “We need to get value for trees standing,” Masso said. “Tourism as an economic industry is ‘in’. We can’t have countervailing pressures to log, or to have unsustainable land use that goes against tourists’ wishes. As First Nations that are landowners and trying to guide the land vision, it’s in our economic interests to come together to help deliver it.”
Tofino Mayor Josie Osborne was invited to speak at the celebration. “This community couldn’t be what it is if it wasn’t for the work of the people in this room and so many others who have fought and who have passionately advocated for the ways that we need to be in synergy with this land,” said Osborne. She reflected on the totem pole raising ceremony that took place at Anchor Park in downtown Tofino in September to honour First Nations Chiefs.
Learn more @ tribalparksalliance.com 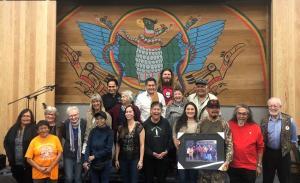 Thank You to this group who stood in solidarity to protect Meares Island old growth forest from logging in 1984. They came together again for a nostalgic photo during the 35th anniversary celebration on April 19 in Tofino.