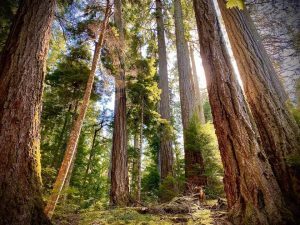 Old growth forests are non-renewable. This is why Friends of Clayoquot Sound, Greenpeace, Wilderness Committee, Sierra Club, and Stand (formerly Forest Ethics) formed the Clayoquot Sound Conservation Alliance (CSCA) in 2006 to support discussions with regional First Nations about protecting the intact valleys of Clayoquot Sound through conservation investment. Since then, FOCS has worked continuously towards permanent protection by supporting local First Nations in securing conservation investments privately and through governments.

Last year, the Government of Canada gave the Ahousaht and Tla-o-qui-aht First Nations a commitment to advance their land-use visions in Clayoquot Sound. However, the specific federal financial commitment remains unknown. Meanwhile, Indigenous Nations are left in a situation where they are forced to log to pay the province for the rights to log, guarding against a corporate takeover.

Over the winter, the Government of B.C. acknowledged its approach on old growth forests is broken, ordering a comprehensive Old Growth Review. With the review now complete, the province will announce changes to the system by the fall. During a time of economic hardship, support for reconciliation-based conservation to safeguard Indigenous communities and the rainforests is critical. Investing in ancient rainforest protection builds towards reconciliation while guarding against the threats of climate catastrophe and future pandemics.