Imperial Metals is engaging in genocidal mining practices and operations that are in direct opposition to the protocols and inherent rights and title of the Secwepemc, Ahousaht, Tla-o-qui-aht, Wet’suwet’en, and Tahltan Nations.

Come stand with Friends of Clayoquot Sound as we support Indigenous Land Defenders & Water Protectors of Imperial No More in banning Imperial Metals from destructive mining in their territories. Together we will confront Imperial Metals Mining Corp major shareholders and executives to hold them accountable at the Imperial Metals Annual General Meeting. We will rally for the Imperial NO MORE Action outside the Executive Plaza Hotel (405 North Road) in Coquitlam @ 8 am. Bring your solidarity presence, cameras, hand drums, banners, noise makers, & signs! It’s time for action!!!

Check out the Press Release below and the Facebook event here:

See you in the streets! 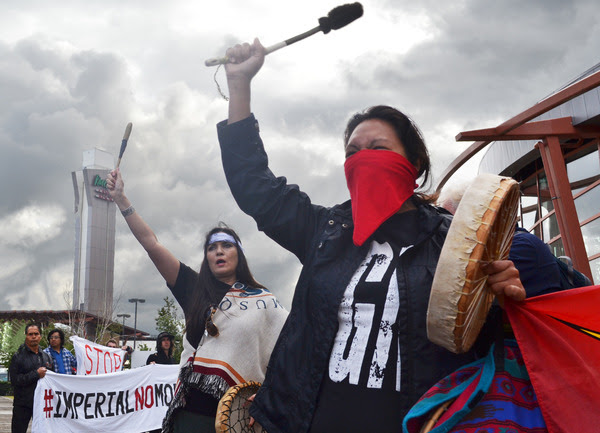 Indigenous delegates and tribal allies will be confronting Imperial Metals at their Annual General Meeting at the Coquitlam Executive Plaza Hotel & Conference Centre (405 North Rd) at 8 a.m. onThursday, May 25, 2017.

“It is clear that there are major human rights and Indigenous rights violations happening within Canada and within our unceded Secwepemc Territory,” says Secwepemc land protector, Kanahus Manuel. “This is especially the case with the Imperial Metals’ Mount Polley mine disaster. The August 2014 tailings pond spill desecrated and destroyed a Sacred area known as Yuct Ne Senxiymetkwe in unceded Secwepemc Territory. The spill has not yet been cleaned up and because of BC’s shoddy mine regulations, the company is now discharging toxic mine wastes directly into Quesnel Lake.”

The Indigenous delegates will warn the Imperial Metals investors they should be aware of the very serious concerns regarding the Mount Polley mine, and the financial risks in investing in poorly run companies like Imperial Metals.

While the company’s shareholders and executives are meeting, the United Nations Working Group for business and human rights is on their first official visit to Canada and will be visiting Williams Lake to investigate Imperial Metals. They will be hearing Indigenous testimonials about the effects of the Mount Polley Mine disaster and of the continued violations of Human Rights by Canada and Canadian resource extractions companies.

The UN Human Rights Council set up the UN Working Group for business and human rights to address the rights violations often associated with extractive industries. Imperial Metals investors must be made aware of the fact that the whole world is watching them and their actions.

Collective Indigenous consent has never been achieved by Imperial Metals Corporations for any of their operations across British Columbia and there are multiple legal proceedings going on against the company. Imperial Metals has also been met with continued direct actions, disruptions and confrontation from Indigenous Peoples, with mine roads blockaded and their Vancouver headquarters occupied.

The Indigenous land defenders action is being carried out under the legal protection of the United Nations Declaration of the Rights of Indigenous Peoples (UNDRIP), which states that Indigenous peoples have the right to block development on their land that was undertaken without their free, prior and informed consent.