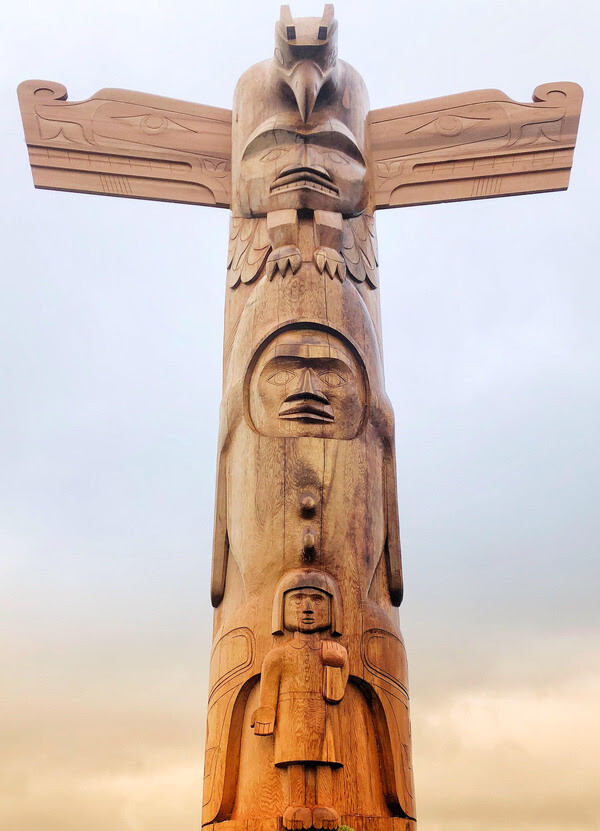 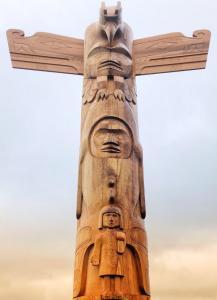 The totem pole or Čiinuł was carved by Joe David honouring the Tla-o-qui-aht Chiefs and their stewardship of the territory. It was raised on September 7, 2018 in Tofino. Photo: Jeh Custerra.

Indigenous governments, with their strong rights enshrined in the Canadian constitution and International law, are a power force in environmental politics. In B.C., Indigenous Nations have halted the Trans Mountain pipeline, defended the Great Bear Rainforest and the Sacred Headwaters of the Stikine, Nass, and Skeena rivers from extractive development. In Clayoquot Sound the protected old growth forests of Wanachus/Hilthuu’is (Meares Island) have secured Tofino’s clean drinking water. All of these initiatives were aided by the dedicated support of allies, but could not have been achieved without Indigenous rights and title. It is the responsibility of environmentally conscientious people around the world to support the leadership of Indigenous Nations who are protecting 80% of functioning ecosystems.
In November, the Tla-o-qui-aht First Nation launched the Tla-o-qui-aht Tribal Parks Allies Certification Standard. This invites businesses operating within Tla-o-qui-aht territory of the Tribal Parks to become Allies and participate in the shared stewardship of the territory. The Tla-o-qui-aht say that Heshook Ish Tsawalk (everything is one and all are interconnected). The Tribal Parks Allies initiatives asks all inhabitants of Tla-o-qui-aht territory to acknowledge that humans have always been a keystone species is this ecosystem.
By becoming certified as an Ally, local businesses can help to achieve the lasting protection of ancient forests, restore abundant salmon-bearing streams, and revitalize the resurgence of Tla-o-qui-aht culture which has endured a period of profound damage. This vision of an ecologically and socially just Clayoquot Sound is shared amongst all of us. Let’s work together to make it a reality before it’s too late. Check out the Tribal Parks Allies website to learn more: www.tribalparksalliance.com