THANK YOU ALL FOR YOUR SUPPORT!

With over 700 attendees, the 2017 Clayoquot Salmon Festival was a total success. Salmon play an integral role in coastal livelihoods, cultures, and ecosystems in Clayoquot Sound. Salmon lead incredible lives, starting in fresh water then migrating to the ocean. Salmon stay at sea for years before their homing instincts guide them back, to the freshwater systems they were conceived in, to reproduce. Celebrating this magnificent species is what inspired Friends of Clayoquot Sound to organize the annual Clayoquot Salmon Festival!

The Salmon Concerts celebrated the return of salmon while raising awareness of and funding for local salmon conservation and monitoring efforts. This year’s Clayoquot Salmon Festival brought a variety of musical events with something for everyone. To kick off the Festival the Compassion Gorilla band brought earthy and folkloric sounds into an explosive performance. MS. PANIK opened the night combining Folk Rock Guitar with Hip Hop Soul & RnB while translating life’s experience into melodies. The Next night, on Saturday, September 16th, 2017, Def 3 headlined a night of hip-hop in support of his latest release “Small World”, with Tofino’s Praxis Life, Pud Fluff, and Sliceoginger getting the party started. THe following weekend of music bought Caleb Hart & The Royal Youths to kick off their Western Canada EP release Tour with Special Guest Buckman Coe! THe ‘origiNation’ EP Album Release Party was a total success filing up the Tofino legion of attendees and a message of peace, love, and hope.

On Thursday, September 21st, the Clayoquot Salmon Festival hosted leading scientist with Fisheries and Oceans Canada, Kristi Miller, to speak about her recent experience having salmon research results muzzled by the Government of Canada under the Harper administration. Dr. Miller is currently the Head of the Molecular Genetics Laboratory at the Pacific Biological Station in Nanaimo and an adjunct Professor in the Department of Forest and Conservation Sciences at the University of British Columbia. Dr. Miller explained the role of infectious disease in wild salmon declines. Dr. Miller also highlighted the new technologies used in her work and the possibilities they bring to salmon research. 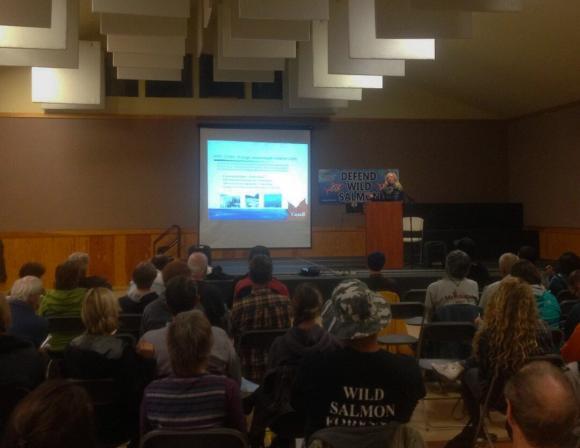 The Raincoast Education Society (RES) organized the Salmon Forest Walk along the Schooner Cove Trail to learn about the role Pacific Salmon play in both the ocean and the forest, and why their unique life history is so integral to this coast. The “Water Quality Monitoring in Clayoquot Sound” talk was hosted by the Raincoast Education Society, in partnership with the University of Washington – Tacoma and Royal Roads University. This informative talk covered a few aspects of oceanographic monitoring projects in Clayoquot Sound to deepen our understanding of the state of local ecosystems related to salmon.

To continue the discussion about issues facing wild salmon, the Clayoquot Salmon Festival & Monday Night Movies put together several short docs on the state of salmon in our waters and all along the BC Coast. The short films highlighted local initiatives in support for wild salmon. Selections include “Caretakers”, “Salmon Will Run”, “Wild Salmon Mural” and “Voyage for Salmon”.The selections were curated for a storyline highlighting the ecological and economic significance of healthy salmon, locally and internationally.

Beach Clean Up with Surfrider

The goals of the “Beach Clean Ups” were set up to promote environmental stewardship in various communities and to ensure safe and healthy beach access to coastal habitats for generations to come. 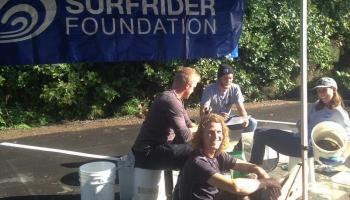